The Winter Olympics have started!! Even though the opening ceremony was utterly dull (it’s what happens when you combine sentiment from the 1950s with technology from the 2010s) I abso-fucking-lutely love the Olympic Games. So the next few weeks I’ll be watching an awful lot of tv. Because of the crappy time difference most of the events will be during the afternoon, so I won’t be able to watch as much as I’d like. Will try to watch all the speedskating events, because the Dutch are actually good at that.

And yes, I am well aware of the hateful hatelaws that Russia has implemented recently. And as a gay man myself it’s really fucking disgusting to me. But I love the Olympics too much much to not watch the sports. And in all honesty I believe those laws wouldn’t have received even a fraction of the attention it got now if it hadn’t been for the Olympics. 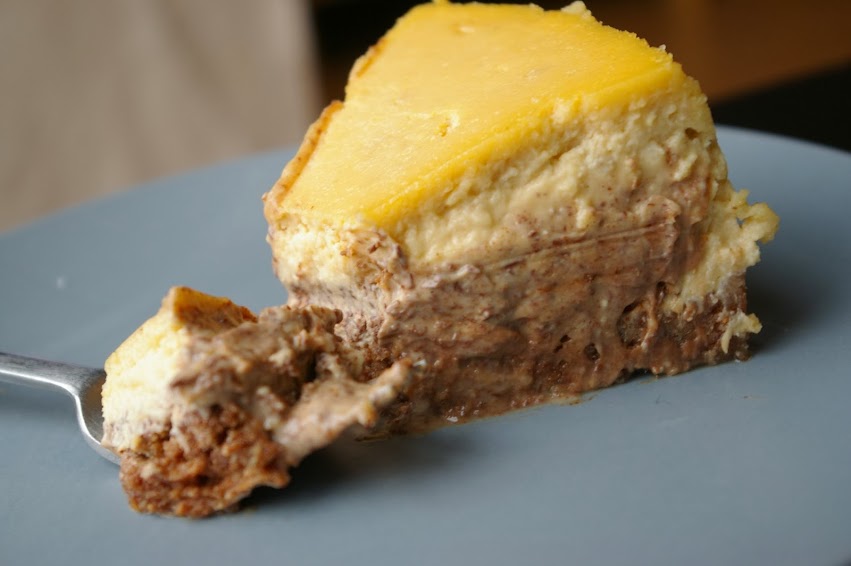 Class has started again, so baking has sort of taken a backseat at the moment. But finally found some time again. The recipe for this cheesecake is based on a chocolate cheesecake recipe from Nigella Lawson’s ‘How to be a Domestic Goddess’. I made it a few times now and the banana really does add something.

It’s really best to bake this au bain marie. But you do have to wrap the tin really well. I didn’t this time, so the bottom was slightly soggy. You could also choose to just bake it, in which case I’d lower the oven temp a bit. Mine was also slightly underbaked, mainly because my oven has 25°C jumps. But it still tasted absolutely amazing.

Step 1. Pulverize the biscuits till they’re very fine crumbs. I used my kitchen machine for this, but you can also do this with a tea towel and a hammer or rolling pin. Then add the cocoa powder and sugar. 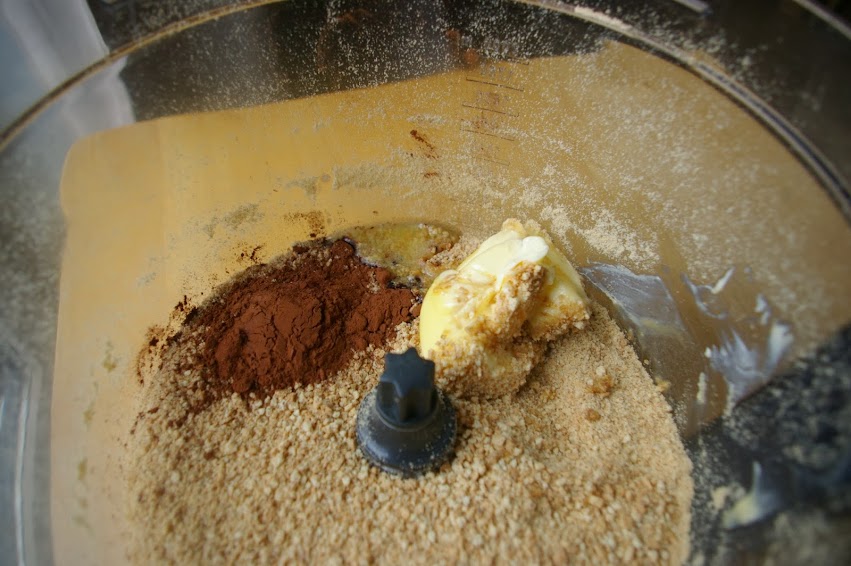 Mix till it’s all well combined. Line the bottom of a 20cm spring form with baking paper and divide the crumb mixture over the bottom. Make sure to press it down well. 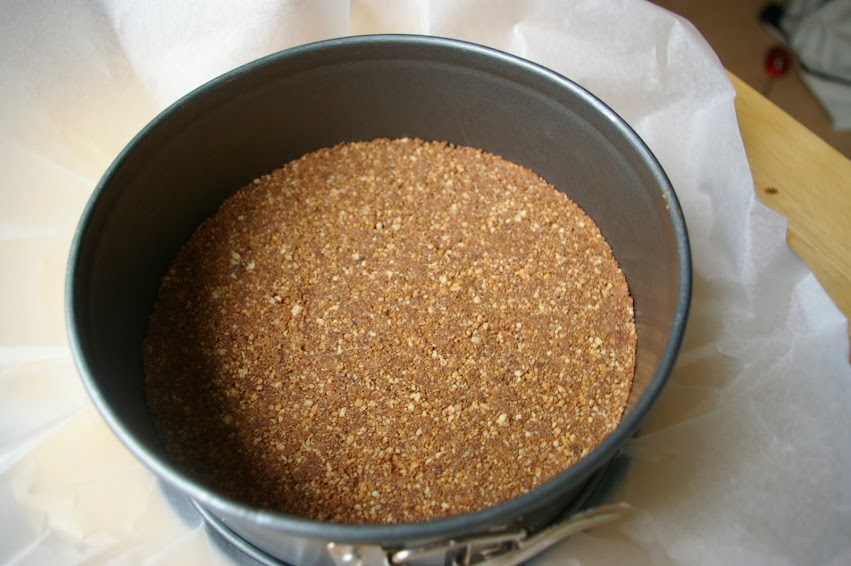 Because it’s best to bake this cheesecake slightly au bain marie you should wrap the tin with aluminium foil, to make sure the water doesn’t leak in (I failed this time). Best to not be frugal with the foil. Put in fridge till you need it again.
Step 2. Put the cream cheese in a big mixing bowl and mix till it’s soft and creamy (I just used a wooden spoon for everything). Then add the sugar and mix till combined. 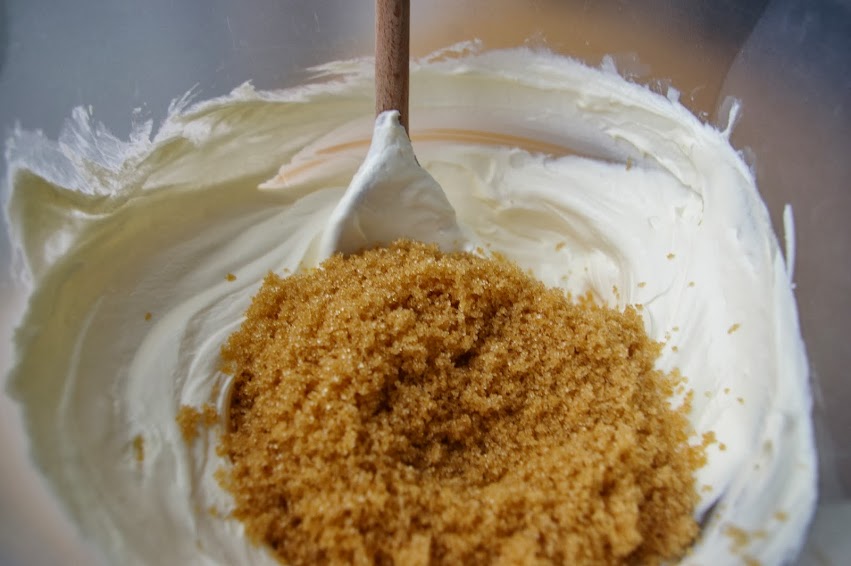 Then beat in the eggs and egg yolks one by one. And lastly stir in the sour cream (I forgot this once, still came out okay).
Step 3. Divide the mixture equally over 2 mixing bowls. In total it should weigh about 1000g, so about 500g per bowl. Then mash the banana and melt the chocolate (microwave for me). Stir in the banana with one half of the mixture and the chocolate with the other half. Just pour in the chocolate while stirring. It will solidify a bit, but that’s fine. 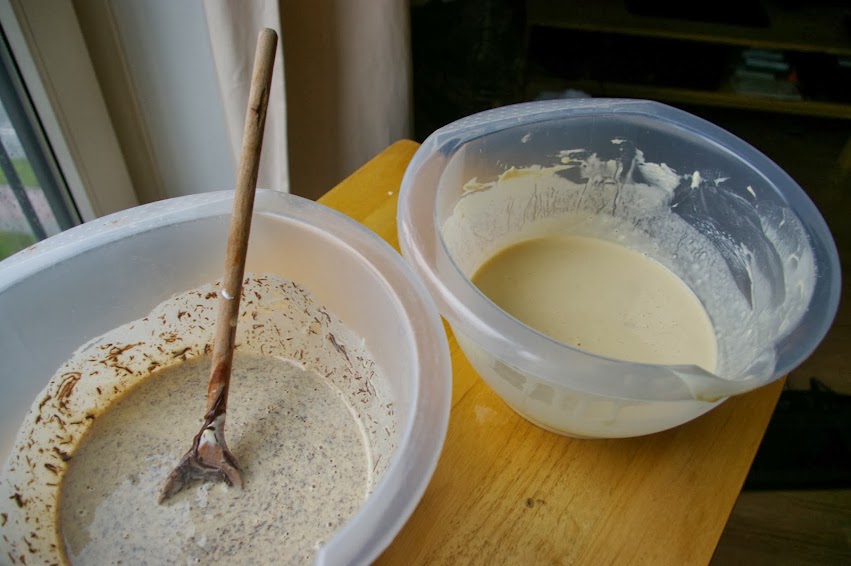 Step 4. Take the in out of the fridge and place it into a bigger baking tin/whatever, so you can pour water into it. First pour the banana mixture into the tin and then pour the chocolate mixture exactly into the center of the tin. 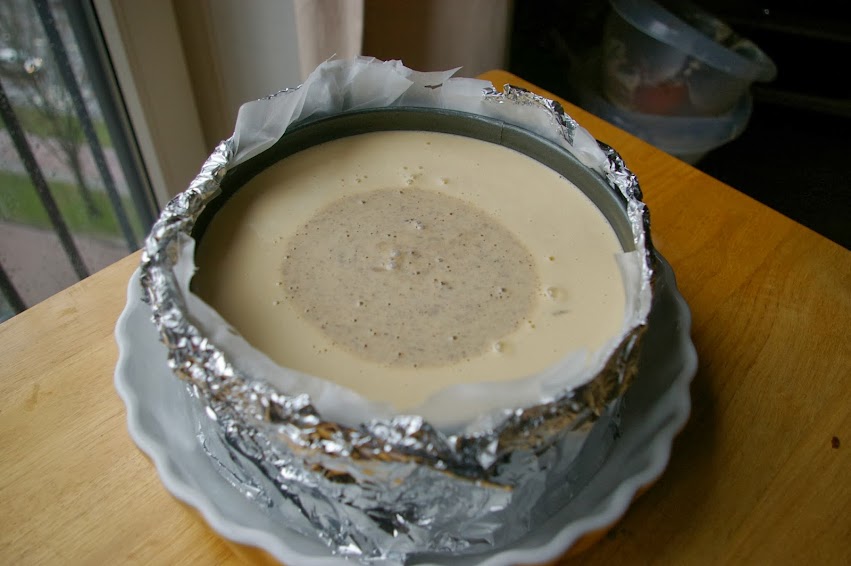 Step 5. Place the whole thing into an oven and pour boiling water into the bigger tin. Try to get 2-3cm of water. Bake it for about 60 minutes at 180°C (165°C for fan ovens). The filling should still have a slight(!) wobble when you take it out of the oven. Be careful with the hot water when you take it out. Unwrap and leave to cool completely before taking it out of the tin. It might tear a little bit, but that’s perfectly normal. 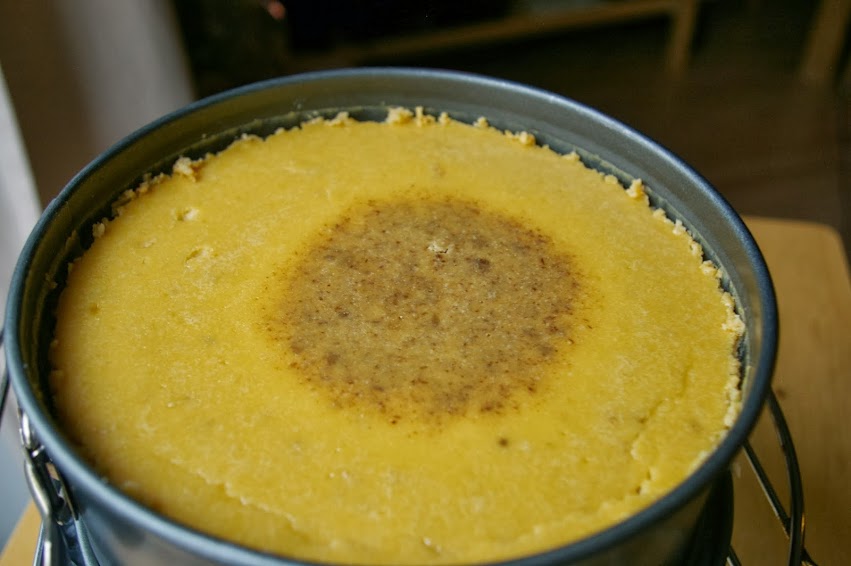